Fitzwilliam Square is a Georgian garden square named after the Fitzwilliam family, Earls of Merrion, who urbanised the land as part of their great estate on the south side of the River Liffey in Dublin, Ireland. The square was managed and developed by Richard Fitzwilliam, 7th Viscount Fitzwilliam and was laid out in 1792. The centre of the square was enclosed in 1813 through an Act of Parliament.

The square comprises a central garden, surrounded by four streets – Fitzwilliam Square North, East, West and South. There are 69 houses with 17 houses in the north, west and east sides and 18 houses on the south side. All four sides of Fitzwilliam Square had long rear gardens and stable lanes.

Lord Fitzwilliam opted for a simple design for the square consisting of red brick houses of four storeys over a basement with the windows diminishing in height in the first, second and third storeys. The typical Fitzwilliam Square house had a standard two-room plan with a rear dog-leg stairs and long yellow-brick rear buildings. Front doors were flanked by pilasters and surmounted by wide fanlights with delicate, lead glazing bars – creating the iconic Dublin doorcase. All the houses are two bays wide except for Nos. 56-59 (North Side), which are narrow three bay and Nos. 5 (East Side) and 35 (South Side), which have broad three bay facades.

From the beginning, Fitzwilliam Square was a prestigious location and during the 19th century it continued to attract the middle classes, comprising of military officers and the professional classes. There was a significant increase in the number of doctors living in the square in the early 20th century, who were locating their consulting rooms within their private houses,which was also the case for the legal residents of the square. This period of change showed the adaptability of the houses and represented a growth of non-residential uses on the square. In the mid 20th century, doctors and their families moved to the suburbs and continued to use Fitzwilliam Square for their consulting rooms.

By 1950, only 24 houses were still residential and 69 doctors had consulting rooms on the square. This trend continued until the 1970’s when the relocation of St. Vincent’s Hospital from Leeson Street to a new campus meant many of the doctors in Fitzwilliam Square moved their practices south to Donnybrook. Following their departure, multi-office use became popular on the Square including accountants, solicitors, doctors, management consultants, architects and financial services.

The layout of the garden in the centre of Fitzwilliam Square has not changed since its layout in 1813. The main reason for this may be that the garden has remained in private ownership unlike the other Georgian Squares in Dublin, i.e. St. Stephen’s Green, Mountjoy Square and Merrion Square whose original layouts have changed considerably over the years.

In 1813, an Act was passed naming 14 Commissioners to be responsible for maintaining the central garden. The layout of the Garden in the early days comprised of perimeter planting of trees and flowering shrubs around the large grassed open space in the centre.

Later in the 19th century, the planting of the flowerbed was added to the garden.  There was also the added responsibility of the maintenance of railings, gates and garden seats. In 1875, new gaslight pillars were erected and a few years later the Commissioners paid Dublin Corporation to widen the kerb and concrete path outside the railings. In the 1880’s, the final physical change to the garden was the erection of a small timber summer house on the eastern side.

The garden became an international focus during the later 19th century when the Lawn Tennis Championships of Ireland were first held on the open grass centre. In the 20th century little changed until in 1963, the original 150-year lease expired ending an historic link with the commissioners and the early days of the square. After a few years of discussion it was agreed that the garden would be leased to the Fitzwilliam Square Association Ltd. for another 150 years.

Today the large grassed open area remains and is used still for tennis in the summer and the pathways within this area along with the planted trees and shrubbery have remained intact as existed nearly two centuries ago.

Dublin, Ireland, 1881. Will and Isobel Fitzgerald settle into number 30 Fitzwilliam Square, a home they could once only have dreamed of. A baby is on the way, Will takes over the Merrion Street Upper medical practice from his father and they are financially secure. But when Will is handed a letter from his elder brother, Edward, stationed with the army in India, the revelations it contains only serves to further alienate Will from his father.

Isobel is eager to adapt to married life on Fitzwilliam Square but soon realises her past can never be laid to rest. The night she met Will in a brothel on the eve of his best friend’s wedding has devastating and far-reaching consequences which will change the lives of the Fitzgerald family forever.

Read An Excerpt From Chapter Five…

[Isobel] smiled then turned as the morning room door opened and Alfie was shown in.

“I was in the gardens, making myself scarce, and I saw the three of you walk home so I thought I’d follow you.”

“Is Mr Ellison is calling on Mother again?” Isobel asked. “Should I call, too?”

“What do you mean, again?” Will inquired before Alfie could reply.

“With all that’s happened, I forgot to tell you that Mr Ellison appears to be courting Mother,” Isobel told him.

“There’s no ‘appears’ about it,” Alfie added. “He calls to the house every few days.”

“Mr Ellison doesn’t need my permission to court Mother, Will.”

“No, he hasn’t,” Alfie replied. “But he knows that I know why he’s calling. I also called to thank you for taking David on as locum, Will. He’s looking forward to Monday.”

“I’m looking forward to him starting, too. I dealt with all the patients myself last week. I don’t want to have to do that again.”

“When do you think Dr Simpson will return?”

Will didn’t answer the question and Alfie flushed. “It’s none of my business. I’m sorry, Will.”

“You and David must come to dinner soon,” Isobel interjected brightly.

“That’s very kind, but how, exactly?”

“We’ll invite David and you will call at an agreed time and be ‘persuaded’ to stay to dinner,” she said and Alfie mulled it over for a few moments before nodding.

When he had shown Alfie out, Will returned to the morning room and Isobel sat on the sofa making a helpless gesture with her hands.

“Someone needs to speak to Mr Ellison about him courting Mother so soon after Mr Henderson’s death. If Alfie is reluctant to do it, then I will. On Monday.”

Buy A Suitable Wife: The Fitzgeralds of Dublin Book Two the sequel to A Scarlet Woman for

Or read A Suitable Wife FREE with

Buy the A Suitable Wife paperback at

Series: The Fitzgeralds of Dublin 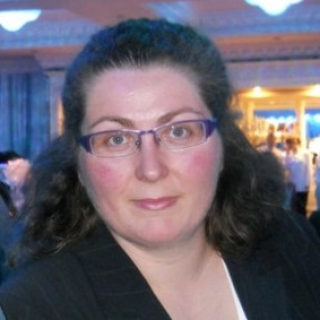 Lorna Peel is an author of historical fiction and mystery romance novels set in Ireland and the UK. A SCARLET WOMAN, A SUITABLE WIFE and A DISCARDED SON - books one to three in The Fitzgeralds of Dublin series - a gritty family saga set in 1880s Ireland - are out now on Kindle, in paperback and on Kindle Unlimited. A FORLORN HOPE - book four in the series - will be published in 2020.